Building your first neural network self driving car in Python

2. Learn to drive it

4. Soldering Iron and Multimeter to determine positive and negative and circuits firing

5. Need Arduino board and cable

6. Install software and load Arduino program onto board

8. python carDriving.py to test soldering and driving by keyboard 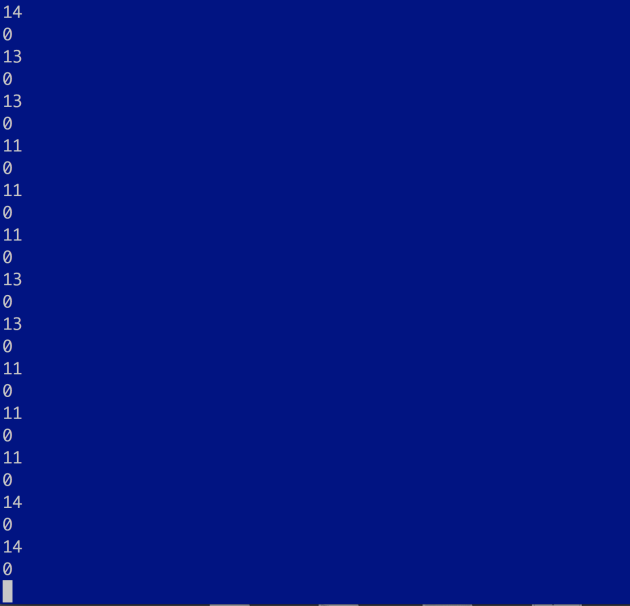 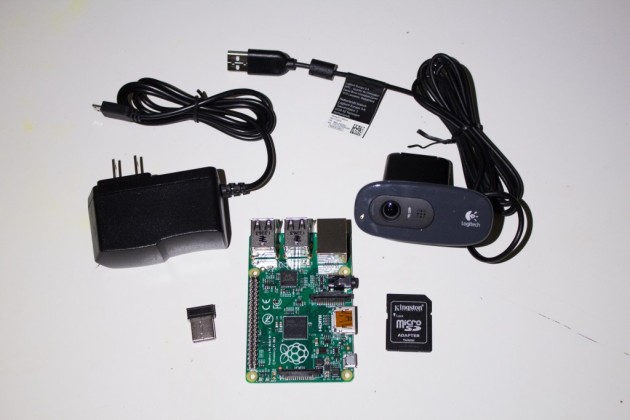 On the first iteration of the physical devices, I mounted the disassembled Logitech C270/Raspberry Pi on the car with a coat hanger that I chopped up and modified to hold the camera. I pointed it down so it could see the hood and some of the “road”. The webcam  captures video frames of the road ahead  at ~24 fps.

I send the captured stream across the wifi network back to my MacBookPro using python server implementation using basic sockets.

On my MacBookPro laptop computer, I run another client python program to connect to Raspberry Pi using basic sockets. I take the stream color stream 320×240 and down sample and grayscale video frames for preprocessing into a numpy matrix.

Wirelessly stream video and capture using opencv2 and slice into jpeg, preprocess and reshape numpy and feed array into with  key press data as label. 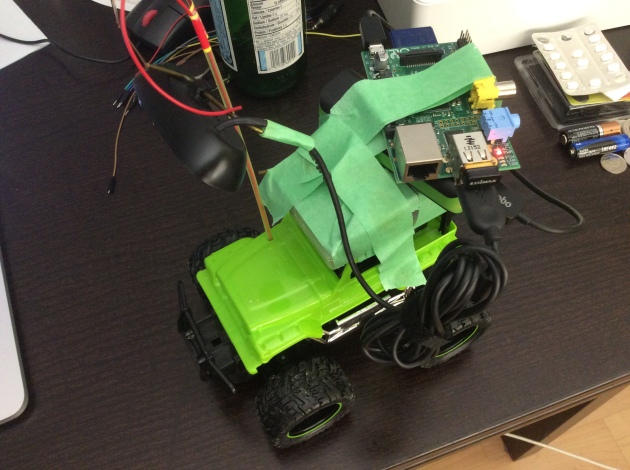 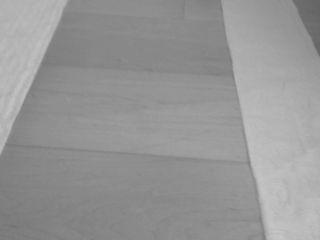 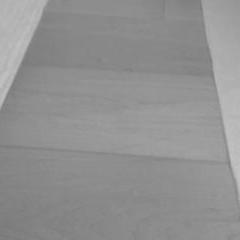 Converted numpy data to pickle and then use it for training python simple 3 layer neural network. 65536 neurons for input layer,  1000 neurons for hidden layer and 4 output neurons.  Forward, None, Left, and Right.

LiDAR sensors and software for real-time capture and processing of 3D mapping data and object detection, tracking, and classification. Can be used in self driving cars, security perimeter systems, interior security systems.

Drive a Lamborghini With Your Keyboard

Convolutional Neural Network in one picture

2015 BlackHat there was some talks on Deep Learning

In this presentation they are doing static analysis on code and transcode it to images and use CNN for predictions. Trained on 1.6 million examples.

In this presentation model tries to do protocol classification. Unsure on the model. Maybe an RNN? 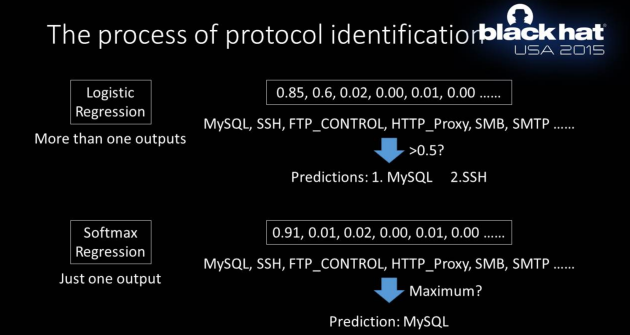 Modern object recognition models have millions of parameters and can take weeks to fully train. Transfer learning is a technique that shortcuts a lot of this work by taking a fully-trained model for a set of categories like ImageNet, and retrains from the existing weights for new classes. In this example we’ll be retraining the final layer from scratch, while leaving all the others untouched. For more information on the approach you can see this paper on Decaf.

Though it’s not as good as a full training run, this is surprisingly effective for many applications, and can be run in as little as 75 minutes on a laptop, without requiring a GPU. The data I used is from Kaggle MNIST dataset.

Let’s reshape the train.csv data from Kaggle with this script to jpegs 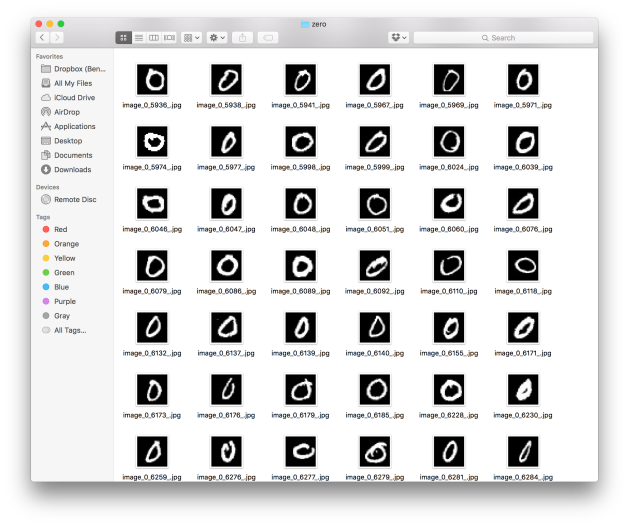 Script to convert train.csv to images in python

Let’s move the data to the proper folders

These are screenshots of the re-trained Inception v3 model 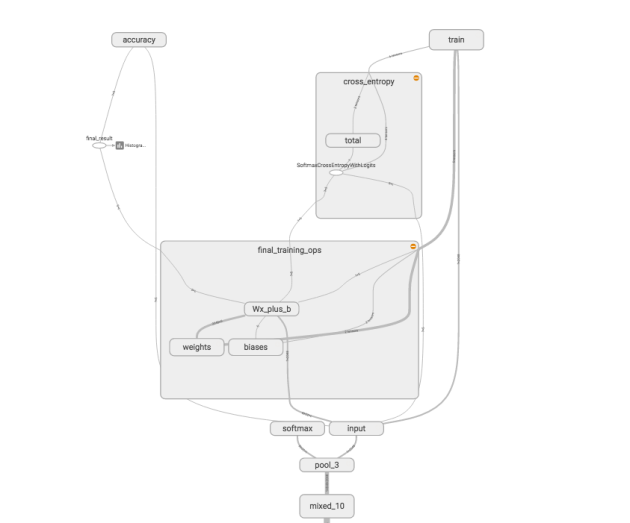 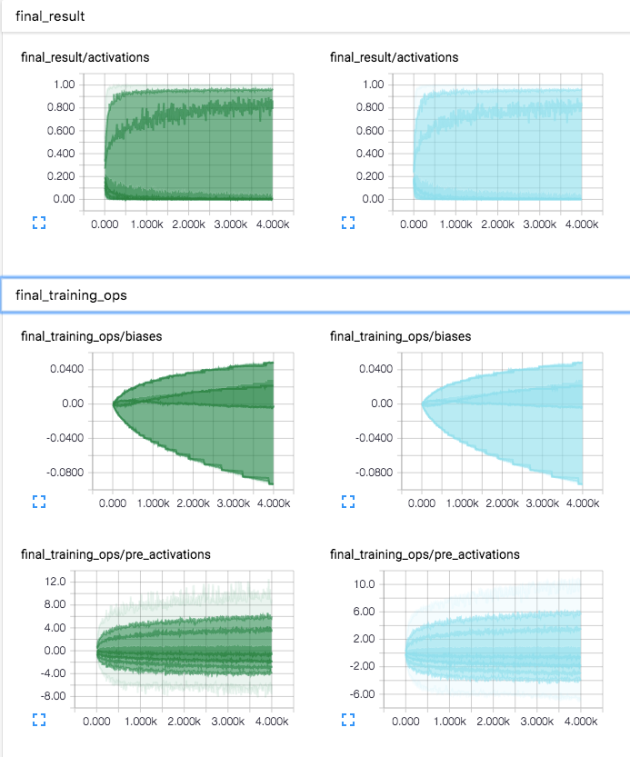 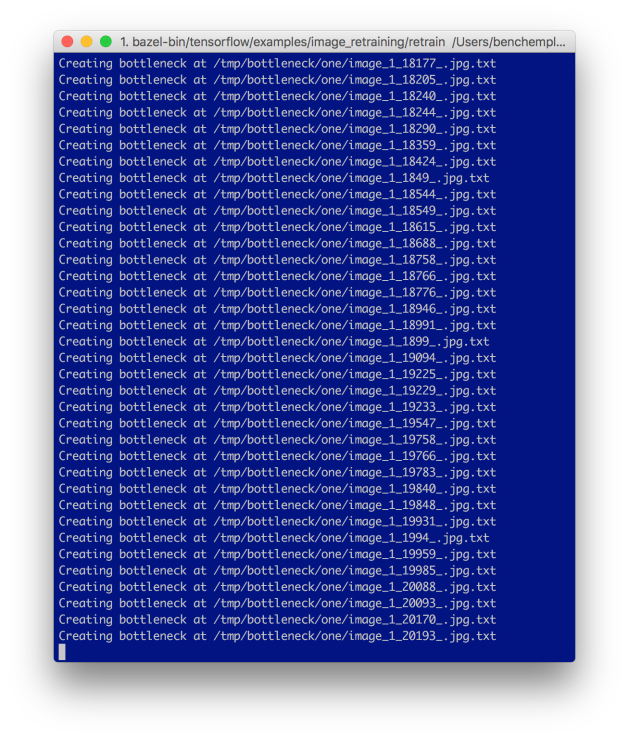 Using the re-trained model to do MNIST prediction

Neural Network from scratch in Python

So you want to teach a computer to recognize handwritten digits? You want to code this out in Python? You understand a little about Machine Learning? You wanna build a neural network?

Let’s try and implement a simple 3-layer neural network (NN) from scratch. I won’t get into the math because I suck at math, let alone trying to teach it.  I can also point to moar math resources if you read up on the details.

I assume you’re familiar with basic Machine Learning concepts like classification and regularization. Oh, and how optimization techniques like gradient descent work.

So, why not teach you Tensorflow or some other deep learning framework? I found that I learn best when I see the code, and learn the basics of the implementation. I find it helps me with intuition in choosing each part of the model. Of course, there are some AutoML solutions that could get me quicker ways to a baseline, but I still wouldn’t know anything. I’m trying to get out of just running the code like a script kiddie.

So let’s get started!

For the past few months (thanks Arvin),  I have learned to appreciate both Classic Machine Learning (prior 2012) and Deep Learning techniques to model Kaggle competition data.

The handwritten digits competition was my first attempt at deep learning. So, I think it’s appropriate that it’s your first example to do deep learning. I remember this important gotcha moment. It was seeing the relationships between the data and pictures. It helped me to imagine the deep learning concepts visually.

We’re going to use the classic visual recognition challenge data set, called the MNIST data set. Kaggle competitions are awesome because you can self score your solutions and they provide data in simple clean CSV files.  If successful, we should have a deep learning solution that should be the able to classify 25,000 images with a correct label. Let’s look at the CSV data.

Using a Jupyter notebook, let’s dump the data into a numpy matrix, and reshape it back into a picture. Each digit has been normalized to a 28 by 28 matrix.

Architecture of a Simple Neural Network

Here’s a look of the 3 layer network proposed above:

Basic Structure of the code

Data structure to hold our data

a.k.a The Forward Pass

The purpose of the feed forward function is to pass the input into the NN matrix and return the new activations. 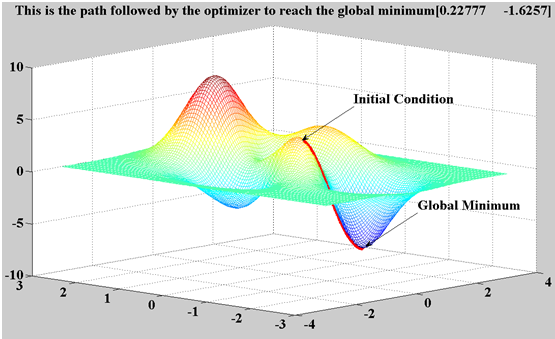 a.k.a The Backwards Pass

Our goal with back propagation is to update each of the weights in the network so that they cause the actual output to be closer the target output, thereby minimizing the error for each output neuron and the network as a whole.  Back prop is a method to stop us from overfitting our model, so the model is more generalized.

Putting it all together – Network.py 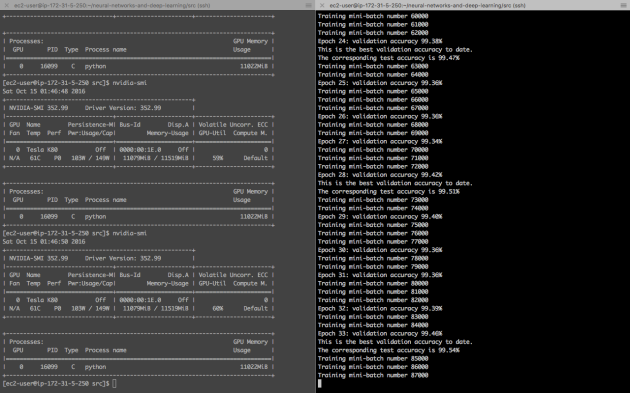 When Should You Perform a Security Audit?

You should audit your security configuration in the following situations:

As you review your account’s security configuration, follow these guidelines:

Take these steps when you audit your AWS account credentials:

Take these steps when you audit your existing IAM users:

Take these steps when you audit your IAM groups:

Take these steps when you audit your IAM roles:

Review Your IAM Providers for SAML and OpenID Connect (OIDC)

If you have created an IAM entity for establishing trust with a SAML or OIDC identity provider, take these steps:

If you have created a mobile app that makes requests to AWS, take these steps:

Take the following steps for each AWS region:

Review AWS Policies in Other Services

Review the permissions for services that use resource-based policies or that support other security mechanisms. In each case, make sure that only users and roles with a current business need have access to the service’s resources, and that the permissions granted on the resources are the fewest necessary to meet your business needs.

Policies are powerful and subtle, so it’s important to study and understand the permissions that are granted by each policy. Use the following guidelines when reviewing policies: